The Forum at St. Luke's 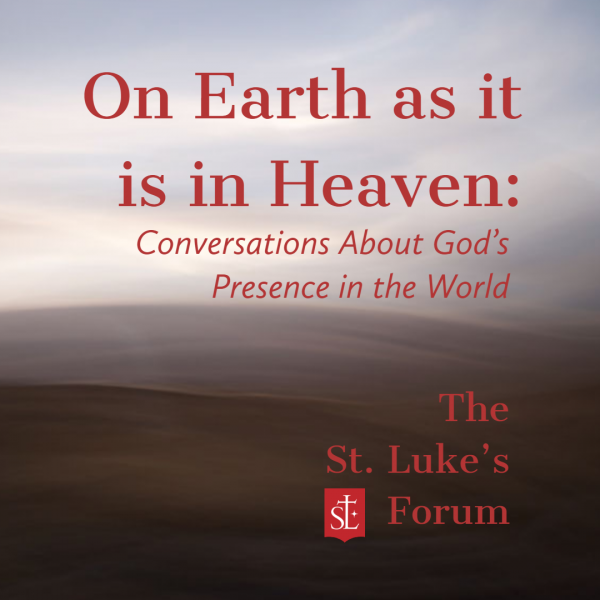 On Earth as it is in Heaven:
Conversations about God's Presence in the World

Each week on Sunday morning, we gather in the Parish Hall and online to consider the big issues of being Christian in our world. St. Luke's invites the most interesting leaders in the area to discuss topics ranging from race relations to economic justice, evangelical Christianity to Islam. At St. Luke's, we appreciate the minds God has bestowed upon us and The Forum helps us stretch them!

Here's a sample of Forums from Spring 2021

Sunday, May 16: Leaving the Security of Our Tribes - Part III: Healing Gang Violence

Ed welcomes David Lee Windecher, a trailblazing criminal defense attorney, author, and activist in the social justice movement to end mass incarceration, reduce recidivism, and redress racial inequity in the criminal justice system, to this Sunday's Forum. For the last three Forums, Ed has interviewed men who were involved in gang violence (the KKK, the Skinheads, and a Miami Latino Gang). After their emancipation/redemption, they all found ways to pass help others. Hear about David Lee's nonprofit to advance restorative, not retributive, justice. Growing up poor in Miami David Lee was arrested 13 times and spent over 7 months incarcerated as a juvenile. He dropped out of high school and joined a gang for protection. Another resurrection story, David's story of transformation from defendant to defense attorney challenges our notions of justice and criminality. David believes his story sheds light on the loss of humanity within the legal system in which a punitive approach damages people and the community at large.

Sunday, May 9: Leaving the Security of Our Tribes - Part II Healing the Addiction of Hatred

Arno Michaelis’s presence in the life of Chris Buckley brought the Ku Klux Klan leader out of the White Nationalism movement and helped liberate a practicing violent white supremacist. Dr. Heval Kelli helped Chris Buckley find a way out of toxic Islamaphobia that Buckley had nursed since fighting in the Afghanistan War. Ed Bacon interviews Michaelis and Kelli, a Buddhist and a Muslim, unpacking the practical practice and power of “unconditional compassion” for making persons and our nation Whole. The two film makers who are documenting this redemptive story. (https://www.clarkstonfilm.com/film) will be present This Forum will go to the heart of hate-based violence and how individuals and the U.S. can be transformed. Part II of this Easter Resurrection story.

Sunday, May 2: Leaving the Security of Our Tribes: Part I Healing the Addiction of Hatred

Chris Buckley was a leader in the Georgia Ku Klux Klan movement and a violent white supremacist. His wife, Melissa, sensed that his devotion to hate-based violence was functioning as an addiction and that her husband needed intervention. The story culminates in a miraculous transformation and liberation of Chris from his hate addiction using the 12-step model. Ed Bacon will interview Chris, his wife, Melissa, and the two film makers who are documenting this redemptive story. (https://www.clarkstonfilm.com/film) This Forum will go to the heart of hate-based violence and how individuals and the U.S. can be transformed. Ed will connect the dots between the Buckleys’ story and the Christian Nationalist movement that fueled the January 6 insurrection at the U.S. Capitol. Above all, this is an Easter Resurrection story.

The Price of Being A Free People is that No One is Coming to Save Us
The Vice-Chancellor of the University of the South, Sewanee, Dr. Reuben Brigety, has been in office less than a year. Within that brief period of time, the Board of Trustees has issued a statement denouncing the Confederate Christianity expressed in the founding of the university, there has been a season of phantom vandalism at the Brigetys’ home, and referees at a lacrosse game emptied the stands after Sewanee students yelled racist epithets at the African American athletes playing on the field. Throughout the upheavals, Dr. Brigety, the first African American Vice-Chancellor (President), has approached every crisis as an opportunity to lead Sewanee into a new chapter of educational excellence. In this Sunday’s Forum he discusses each event with Ed Bacon and responds to the questions, “Where Are We Now?” and “Where Do We Go From Here?” Listen and learn from the leader of Sewanee who earlier was dean of the Elliott School of International Affairs at George Washington University and U.S. ambassador to the African Union. He is a graduate of the U.S. Naval Academy, holds a doctorate in international affairs from the University of Cambridge.

Below is a video of Dr. Brigety's talk from All Saints Chapel at Sewanee and some links Ed and Dr. Brigety think might be of interest:

St. Luke’s welcomes the author of “The Three Mothers: How the Mothers of Martin Luther King, Jr., Malcolm X, and James Baldwin Shaped a Nation.” Anna Malaika Tubbs speaks with Ed about the impact of these three mothers of had on the course of American history.

The weekend of March 6 and 7, 2021 marks the one year anniversary of our last Sunday worshipping together before COVID -19 paused our physical in-church gatherings for worship. Our guest speaker that March 8-9, 2020 weekend was the acclaimed Princeton professor and scholar of the gnostic gospels, Elaine Pagels. At the Forum, March 7, Professor Pagels and Ed Bacon will reflect together on her life, thinking, teaching, and writing during the pandemic.

Rev. angel Kyodo Williams is an esteemed Zen Buddhist priest and the second woman of African descent recognized as a teacher in the Japanese Zen lineage in the world. Krista Tippett of “On Being,” says, “She is one of our wisest voices on social evolution and the spiritual aspect of social healing.” Rev. angel and Ed Bacon have been friends for almost a decade. They co-led an interfaith pilgrimage to Pando, the one-tree forest. She’s the author of Being Black: Zen and the Art of Living with Fearlessness and Grace and Radical Dharma: Talking Race, Love, and Liberation. In 2020, she created the first annual Great Radical Race Read.

Ed Bacon continues a series of conversations with national leaders during which he poses two questions, “Where Are We Now?” and “Where Do We Go From Here?” This week’s guest, the Rev Kim Jackson is both Episcopal priest and State of Georgia Senator. As the vicar of The Church of the Common Ground, Rev. Jackson serves a parish of those who are experiencing homelessness or who have had that experience. She also is the first out lesbian elected to the state Senate. She tells her story of experiencing a call to ordination as well as a call to elected public service. Her witness to the Heritage of prophetic leadership is transformational.

We continue a series of conversations about “Where Are We Now?” And “Where do we go from here? Dr. Catherine Meeks directs the Absalom Jones Center for Racial Healing. A keen prophetic voice about Church, Culture, and the Human Heart, Dr. Meeks explains the inspiring leadership of Absalom Jones as well as God’s call for healing to each of us after 500,000 COVID-19 deaths and a post-insurrection America.

“Where are we now?” “Where do we go from here?” These are two questions all of us are considering in the context of transitions the new year has brought us. Ed Bacon continues a series of Forums with thought leaders who are grappling with these questions and whose leadership is impacting lives. Paige Alexander, CEO of the Carter Center, is explicitly charged with “building peace, health, and hope for the world’s poorest and most vulnerable people.” Ed met Paige during the series of Mourning Into Unity prayer vigils St. Luke’s hosted. She has much to say about moving forward with hope in unsettling times.

Ed welcomes author and scholar Diana Butler Bass to the St. Luke's Forum this Sunday, January 24 immediately following the 10 a.m. service. Dr. Butler Bass has written extensively on the history of Christianity, the church in America, and spirituality. She will bring her knowledge of the terrain of religious America to help us understand the religious expressions and dynamics feeding so many who took part in the siege of our Capitol.

below, right to see what is available

Recordings of Past Forums

If you are interested in joining a Sacred Ground Dialogu...

Wednesday in person and on zoom

Sign up for a new round of Sacred Ground dialogue groups...

If you missed or just want to watch again, Ed's forum on...